On a Saturday afternoon, I met up with the Head of year 10 in an inner London Secondary School, Mr Arthur, who had just finished his Saturday school football training lesson with his year ten boys. We got settled in his office, and this is how it went down…

Moses: It should be, but I’ve made a Saturday club alongside my colleague Mr Dwaah. We wanted to make a program for the kids who will benefit from extra tuition. We aimed to create something that kids could relate to, so at the beginning, we taught English and Math infused with Music to engage with our pupils. We introduced football and dance to remove negative stereotypes and still build on student and teacher relations. This also brought about a relationship with Arsenal FC through their community program – which the pupils love as they get to go games courtesy of Arsenal FC, and also the dance students have performed in various shows and productions. What I never expected to see is the students bonding the way they do, these kids were “considered” to be disengaged, but the Saturday school has brought them together. Some of them wouldn’t have been caught dead with each, other, but now they’re working together productively and illustrating teamwork, becoming a tight unit.

We made a mentoring a scheme, within Saturday school to ask; why? It’s all fine saying you want to be a plumber – but why? Do you know what it takes? We introduced the scheme to help our pupils open their minds and stay on the right track with their choices, which could affect the rest of their lives.

K: So how long has this Saturday school been running for?

Moses: It was meant to be a 12-week program that started in September 2014 and we, are still running now. There has been a lot of ups and down but we still striving forward and pushing our kids to achieve higher.

K: A religious teacher, teaching sports, how does that work?

Moses: Well I use to do athletics and play football, so I’m quite sporty. I wanted the program to be a success so I help out where I can. I have used a few connections through my sporting achievements to help develop careers of pupils who are pursuing a career in sports.

K: What is your teaching style?

Moses: I’m fair, strict and straight to the point. I’m just well-planned, and I work hard to make sure my pupils get the best education.

I’ve worked in inner London schools; I enjoyed helping students to challenge their environment and push them to a higher level. Most of the time the pupils who are disengaged, do have qualities within them that just need to be harnessed. I’m always up for a challenge and to make a difference and it’s like that in every aspect of my life.
One thing I learned about being a teacher there needs to be a line; you can’t be friends with your pupils in my opinion. You have an obligation to teach them and guide them. There have been times I have helped pupils with outside of school matters that affected how they behave in school. I’ve gone beyond my duties as a teacher, (to respect and protect my past pupils’ privacy I won’t divulge the full details) but situations like those have made me realise the importance for regard to the teacher-pupil relationship.
In my opinion, I want to be recognised as a teacher with a plan who wants the best for his pupils. Someone to be their north star, strict, fair and knows what he’s doing. I want my pupils to have faith that I can guide them the right way. That means I always have to evolve – observe my peers, further my reading, and knowledge; teachers cannot be static. If I want to improve others, I have got to improve myself!

K: Who/what has played a significant influence in your life?

Moses: I attained my degree at SOAS, University of London and there I had an inspirational teacher, Paul Guilford, who challenged me and changed my perception of the world. My first day of university I got kicked out – I came in by myself with my NY cap low, jeans hanging low, being the ‘hard man.’ I got to class early, so it was just Mr Guildford and me in the lecture hall. “Excuse me, where are you meant to be?” he asked me. I said, “I’m here for the Christianity class.” He then asked for my name to which I responded, “I’m Moses, you get me!” He then pardoned me, and then told me to come to his class when I pull my trousers up and remove the hat from my face. “Don’t come here with a negative attitude; you are here to aspire…Get your bag and come back when you’re ready to learn”…I was annoyed, I thought “does this guy know who I am?” and left.
I never had ‘a first’ lesson – actually, that was my first lesson. Mr Guildford did something that made me think. I came to the next class dressed smart but casual. He was surprised but happy to see me again which made me ease up towards him. He used to frustrate me at times as he always called my name out to answer questions in lectures, but it was his way of challenging me to aspire to a higher level. I used to be tired from working night shifts at Sainsbury’s. I was living on my own and had to make sure I paid my bills; it was hard, but I did my best for it not to affect my studies as much as possible. Mr Guildford was aware of this, and I think that gained his respect, which part of me wanted, but it was mainly for me as I always had the drive and was determined to do well. 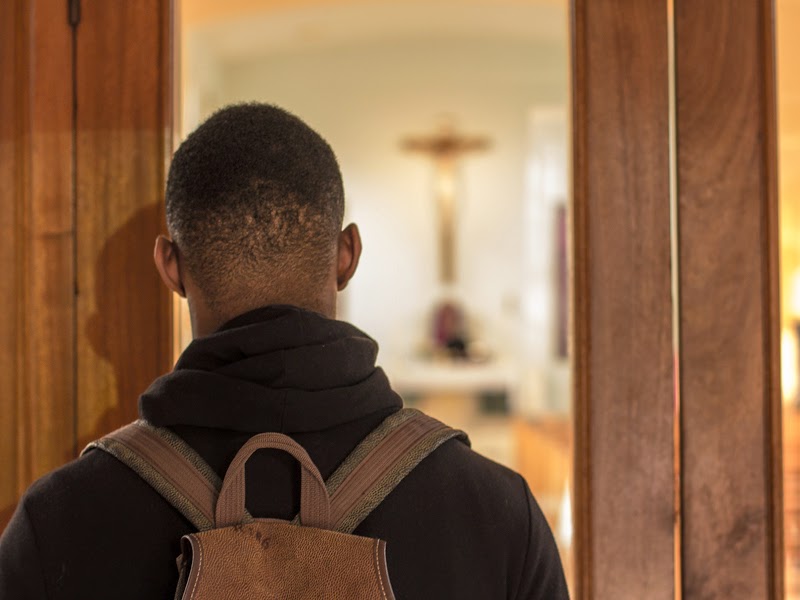 K: Why did you choose to teach religious studies?

Moses: I have always been fascinated with religious studies. This may sound weird but since a kid, I’ve always been interested to know what makes people believe in God. Religious studies is not just learning about God – it tells us a lot about people, history, culture and even language – Arabic, Latin and English to mention a few. I’m always learning about social and cultural influences religion has on our lives. Religious studies is embedded in all areas, you can see it in all aspects of our lives, part of the curriculum we teach our pupils about ethics from a religious perspective, for example, how would Islam view abortion in comparison to Christianity. You’ll be quite surprised to find out how much similar beliefs these two religions share.

K: Have you always wanted to be a teacher?

Moses: Being young and living in Hackney and wanting to be a teacher was like wanting to be a police officer (at that time a taboo). The majority of us lacked aspiration. On second thoughts, it’s not that we lacked aspiration, we feared to express them. Looking back living in Hackney some people wanted to aspire; aspire to be themselves and not just fit within a label/stereotype.
Ask a kid ‘what do you want to be?’ He/she will tell you they want to be a footballer/musician/star – most times they don’t want those careers. They think if they were to tell you their dreams you’ll probably laugh at them. I’ve been that kid. Now I’m older I know that if you want to reach your goals, you have to believe it and go for it, no matter what.
K: What route did you take to become a teacher?

Moses: It was a long road, and when I look back I realised in life you get a lot of knock backs. Look at Usain Bolt, before he became the athlete he is today, he was beaten by the guys he now beats athletes for fun. Look at Lionel Messi; he was told he wouldn’t be a great football player because he was too short.

My journey was a long one attending Brighton University. I used to commute there daily from London, as soon as I finished studying I had to go straight back to work at Sainsbury’s. As you can imagine, I was always late to lectures, but I still made it through. During my time studying for a master degree, I saw a lot of people drop out during difficult times and it does make you ask yourself – why am I here? What do I want to do with my life? Did I come this far just to quit or am I going to persevere when the going gets tough? Well, I passed my PGCE, and I’ve been a teacher for a couple of years.

K: I notice you have some tattoos, what inspired your designs?

Moses: I’m currently doing a Masters in Education at Brunel University. I’m not sure what I want to do with it next, but a few people say I should become a head teacher. I’m 26, and I have been Head of Year for a few years now, but I don’t know if that is what I want to do right now. I’ll see where this road takes me for now.

K: Maybe after your masters, you might know what you want to do next? Moses: To be honest, all I want to do is help pupils reach their potential; the aim is to be a vehicle to guide and inspire others. Some teachers have made statements that have stayed with me. One that I will always remember is about drawing – “it is not the first stroke that defines the picture but the final piece of work”. I want to show my pupils the door, but they are the ones who’ll have to walk through it. I want to be the type of teacher that inspires pupils to reach their potential and goals.